The UK has delivered a remarkable cyclical upswing over the past year; with GDP growing at an average pace of over 3% annualised growth for 5 quarters in a row. This has been the result of extraordinary policy support both on the monetary side (low base rate policy and quantitative easing) and fiscal policy (smaller fiscal drag, Help to Buy scheme), which together with fading risks surrounding the Eurozone, provided a powerful boost to confidence, which helped to kick-start the economy.

The recovery, though very much domestically led, has been broad-based, with both industrial and services output lifting noticeably and with investment strengthening alongside the recovery in consumer demand.

Despite the Bank of England’s (BoE) efforts to guide markets via its forward rate guidance, the dramatic turnaround in economic prospects coupled with uncertainty surrounding the legacy of the financial crisis and its effects on potential output led to a wide range of speculations surrounding the timing and scope of tightening by the BoE. Exactly a year ago, the Bank was suggesting the unemployment rate was likely to remain above 7% (and interest rates on hold) until late 2016; the unemployment is now 6.4% and we are not too far away from the first rate hike.

In its August inflation report the BoE broadly confirmed its view on the economy’s dynamism and made only little change to medium term output and inflation projections. The Bank is though evidently perplexed by a labour market which is tightening quickly but not resulting in any wage pressures whatsoever (Chart 1). 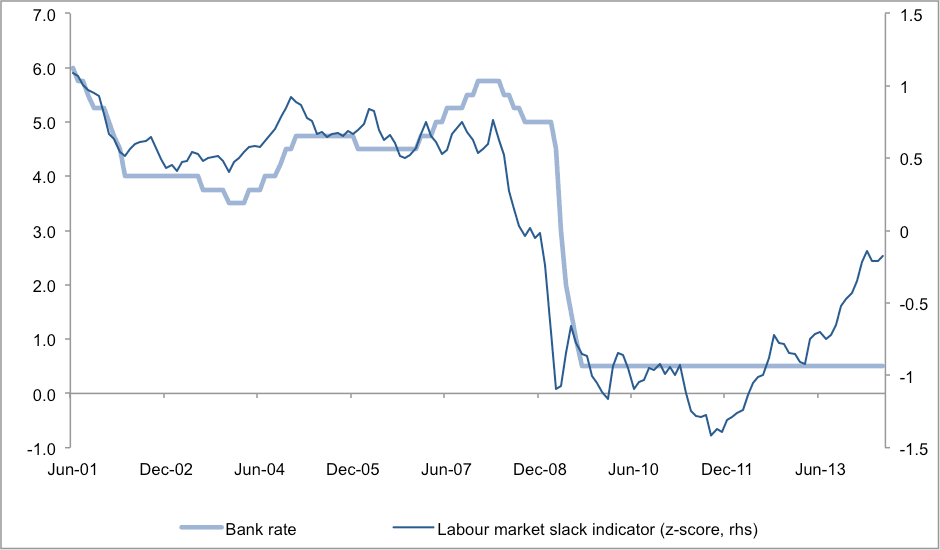 Source: Haver, Millennium, as of August 20

This led the majority of the Monetary Policy Committee to conclude that there must have been a greater slack in the labour market to begin with, though it may now be absorbed at a quicker rate.

We broadly share the core view of the MPC, in particular with regards to the need to tighten policy in a gradual manner, given hurdles to growth from long term fiscal challenges and a still fragile consumer outlook.

In that regard we view a rate hike in H1 2015 as the most likely scenario, with the February meeting being the most probable venue. Such a view is based on steady growth extending into the second half of this year but subdued inflation and wage dynamics leading the majority of the MPC biased to hold rates steady a while longer. We therefore view the market re-pricing of rate expectations following the BoE August inflation report (pushing back the first hike from the turn of the year to H1 2015) as a realignment of market expectations closer to our own view.

Going forward, we expect monetary policy differentiation to become more entrenched in currency dynamics as we head into the BoE hiking cycle. This should be most evident against the EUR where the divergence in real rates seems likely be particularly marked (Chart 2). 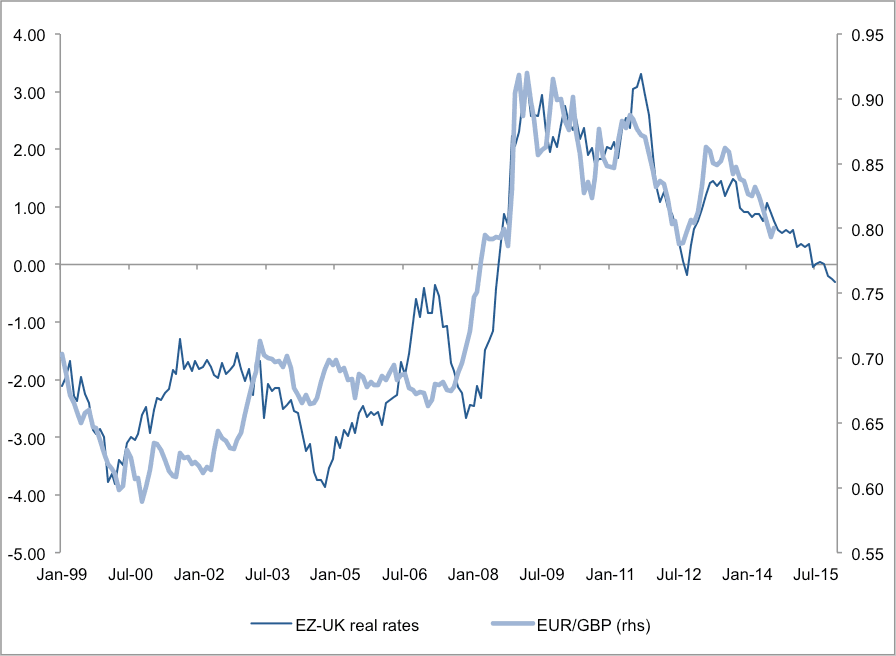